At 15 years old, Rachel is an advocate for the labeling of Genetically Modified foods. Her passion is creating a sustainable future and educates young people on the impact of GM foods through her organization Kids Right To Know.

Rachel Parent at March Against Monsanto 2015 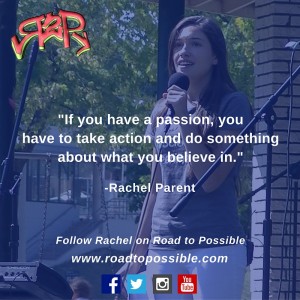 Global News reported that Kevin Folta, chairman of the horticultural sciences department at University of Florida had been privately corresponding with biotech corporation Monsanto. They were developing strategies to counter Rachel Parent and her group, Kids Right to Know.

Folta released a video where he tells Rachel – incorrectly and condescendingly – to get the right information from independent scientists instead of activist websites… He didn’t get Rachel’s message right.

Folta and Monsanto have attacked Rachel and her platform incorrectly through their video. It’s also clear they will not broker any criticism on their product. Their false attacks on Rachel create the impression of covering problematic research in a dubious product. Meanwhile, the real danger and damage here is to the environment, the public and the process of honest diligence in bringing a new agricultural product to our environments and markets.

They need to get Rachel’s message right. Not enough time has been allocated to prove that GMOs are safe for public consumption. They’re rushing to profit. Rachel understands this; that’s why she’s a food safety activist, not an anti-GMO activist.

Thank you, Rachel, for your continued advocacy. The fact that you’ve been singled out, the youngest activist with a profile, proves your message is effective. I hope this motivates even more people to stand with you for long-term independent studies, full transparency and proper due diligence on products for public consumption.

Where Does Your Candidate Stand on GMO Labelling? – by Rachel Parent

The federal election is only three months away, and I think it’s good to know where all the parties stand on mandatory labelling of genetically modified foods and ingredients.

The NDP have been clear about their position. NDP MP Murray Rankin, health critic for the opposition is very supportive of mandatory GMO labelling, so much so, that he introduced a motion (M-480) to label GMOs. Elizabeth May and the Green Party support Minister Rankin’s motion. Both parties are committed to full transparency in food labelling.

The Conservatives have also been clear in their position, as they have consistently ignored consumer demand for GMO labelling during their term in office. After meeting with our Minister of Health, Rona Ambrose, and the follow up meeting with scientists from Health Canada, their position became even clearer — they aren’t interested in labelling GMOs!

In fact, our Minister of Agriculture, Jerry Ritz is clearly opposed to giving Canadians the Right to Know what’s in our food. In the September 22, 2014 issue of The Hill Times Ritz said, “Mandatory GM labelling is an ill-informed, ideologically-driven proposal that would increase red-tape on businesses, decimate Canadian farmers, and drastically increase costs for Canadian consumers.” It’s funny, none of these problems occurred in the 60+ countries around the world that have mandatory GMO labelling. I wonder where Mr. Ritz gets his information from… Monsanto?

So, where do the Liberals stand on this issue? I wanted to find that out for myself, so on July 19, I attended a Liberal town hall meeting in Markham, Ont. and asked that question directly to Justin Trudeau. He responded: “The Liberal Party believes in giving consumers the most information we possibly can about what they’re purchasing… That’s a principle we absolutely support.”

I’m hopeful that this means he supports mandatory GMO labelling, but he didn’t come right out and say it. He kind of skirted around the issue and didn’t specifically address GMOs, so at this point, I’m still not clear where they stand. Have a listen to the video and decide for yourself.


Polls show that about 90 per cent of Canadians want GMOs labelled. We want the right to know what’s in our food, and the freedom to choose what we eat. Unfortunately, Monsanto and Big Food have spent big bucks in North America in the past few years to make sure that GMO ingredients such as corn, high fructose corn syrup, canola, vegetable oil, soy, sugar from sugar beets, and the soon to be introduced Arctic apple, are never labelled.

Unfortunately, we’ve learned over the past few years with GMO labelling initiatives in the U.S., and the recent passing by U.S. Congress of bill H.R. 1599, a bill to block labelling of GMOs (dubbed the DARK Act — Deny Americans the Right to Know), that corporate greed and political corruption, transcend all political party affiliations. I thought politicians were elected to represent the people, not corporations!

I know where the NDP, the Green Party and the Conservatives stand, but unfortunately, I’m still not sure about the Liberals. If we want corporate transparency, freedom of choice, and the right to know what’s in our food, we have to demand answers from our politicians about their position on GMO labeling, and hold them accountable.

Here’s how you can help! Attend an all candidate’s meeting in your area, and ask the question like I did! If enough people ask, they’ll know that this is important to Canadians, and that their chances of getting elected will depend on where they stand on this issue! Together, we can make GMO labelling an election issue. Now is the time!